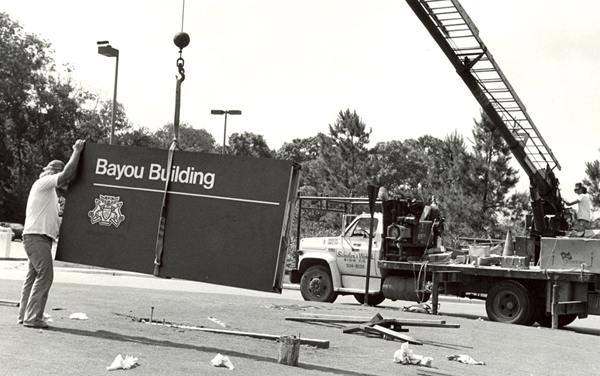 September 1974: Classes began at an off-site location while waiting for construction on the Bayou Building to be completed.

May 1975: UHCL published its first student newspaper. The newspaper did not have a name for its first three publications. It was simply called UHCLC Student Publication. It consisted of a typed 11 x 17 piece of paper folded in half. The staff identified itself as an ad hoc group and listed their names in alphabetical order: Peggie Hickerson, Frank Lynn, Ellen McLean, Glenn Rogers, Joyce Rogers, and Robert Roseman.

October 1975: By issue 4 the student newspaper had a name: UHCLidian, a homonym for UHCL and the Greek mathematician Euclid. The name was chosen as the result of a "name that student newspaper" contest, which offered a mint plant to the winner. Winning the mint was student Gene Goodhart, future studies major, who named the plant Alfred after the university's first president Alfred Neumann. Issue 4 included a staff box with an editor, 3 layout editors, 4 feature writers, 2 guest writers and 1 photographer. Dr. Nan Bruckner served as its advisor.

1978: The student newspaper was published intermittently until 1978 when a class in newspaper publication was added to the Communication Program curriculum (College of Human Sciences and Humanities) and Gloria Morris was hired to teach the class. She became the UHCLidian's second faculty advisor. The position was designated as a 50/50 split between the College of HSH and the Department of Student Services (now called Student Affairs). Under Morris' supervision, the format of the newspaper switched from an 11 x 17 piece of paper folded in half to a tabloid-size newsprint. The student paper has published consecutively since 1978.

1996: Gloria Morris retired after 18 years with UHCL. Patrick Wier was hired as the UHCLidian's third (interim) advisor for one year while the university conducted a search for Morris' replacement.

2001: Under the guidance of Dr. Packard, the UHCLidian staff created a website and began posting PDFs of the newspapers online to supplement the print editions.

2007: Staff members of the UHCLidian successfully petitioned to change the name of the student newspaper from the UHCLidian to The Signal. "The feedback from readers/sources off campus was that 'UHCLidian' sounded like a female body part or a venereal disease," Washington said. "We wanted a name that transcended the campus' physical boundaries now that we had an online presence, something that represented both print and electronic mediums."

2009: Social media was added as a component to The Signal website. It was still publishing in print bi-weekly in addition to maintaining a web presence.

2013: In preparation for UHCL becoming a 4-year university, The Signal hired 2 student workers to serve as editor and design editor to give students a stronger voice/leadership on paper.

2014: UHCL became a 4-year university. By 2014 The Signal's website was a multimedia platform and the newspaper went digital, publishing issues weekly instead of bi-weekly with 2-4 special edition print issues per year. Two more student workers were hired to serve as web editor and social media coordinator to build a stronger online presence. By this time the "Newspaper Publication" class had been changed to "Media Production " to reflect the integration of media components now taught in the class and incorporated into publishing the student newspaper.

2015: Two more student workers were hired to serve as "live reporters " so The Signal could start covering events on campus live via social media, becoming more interactive to actively engage with students on campus.

2016: UHCL made plans to build a student residence hall on campus. Lindsay Humphrey was promoted from Publications Specialist to Manager of Student Publications in the fall of 2016 to manage the paid student staff so that the paper could start publishing year-round beginning summer of 2017. Two more student workers were hired as "reporters " to supplement the lack of a class while publishing during the summer. The Signal now operated as a hybrid with 8 paid student staff members and a class in Media Production producing content for course credit during the fall and spring semesters. At this point, The Signal had added blogs, briefs, podcasts, photo galleries and slideshows, interactive graphics, maps, listicles, quizzes, press releases and literary works to its website. The Signal won a Silver Crown Award from Columbia Scholastic Press Association (housed out of Columbia University) for overall excellence in digital newspaper, naming it one of the top three digital student newspapers nation-wide.

2017: The Signal began publishing year-round beginning summer 2017. Print issues were not popular, so print publication was reduced to one New Student Orientation issue. The Design Editor position is redefined to a Managing Editor position as the newspaper is only publishing one issue per year in print.

2019: The New Student Orientation issue went digital; The Signal was now a 100% digital newspaper. The Signal won its second Silver Crown Award from Columbia Scholastic Press Association for overall excellence in digital newspaper, naming it one of the top two digital student newspapers nation-wide. It tied for the Silver with University of Portland's The Beacon; no Gold was awarded this year.

2020: The Signal was nominated for its third Crown Award from Columbia Scholastic Press Association for overall excellence in digital newspaper naming it, once again, one of the top three digital collegiate newspapers nation-wide. During College Media Association's NYC20 Conference, CSPA awards The Signal the Gold Crown, alongside Ball State University's Byte BSU and Savannah College of Art and Design's SCADConnector. This was the first time in the history of the university that a UHCL student publication received a Gold Crown.

In March, as the COVID-19 pandemic spread throughout the United States and the university moved to remote learning, The Signal also transitioned to completely remote operations. The paper moved to bi-weekly publishing to accommodate for the challenges presented by the pandemic.

Taleen Washington retired, as did the Media Production Course. The Signal was now run by a paid student staff, in accordance with best practices for four-year universities, advised by Lindsay Humphrey, manager of student publications. Lindsay became the newspaper's sixth advisor. This was the result of a six-phase strategic plan developed by Washington to successfully transition the newspaper from a classroom model to a paid staff model that is more diverse and representative of the student body.