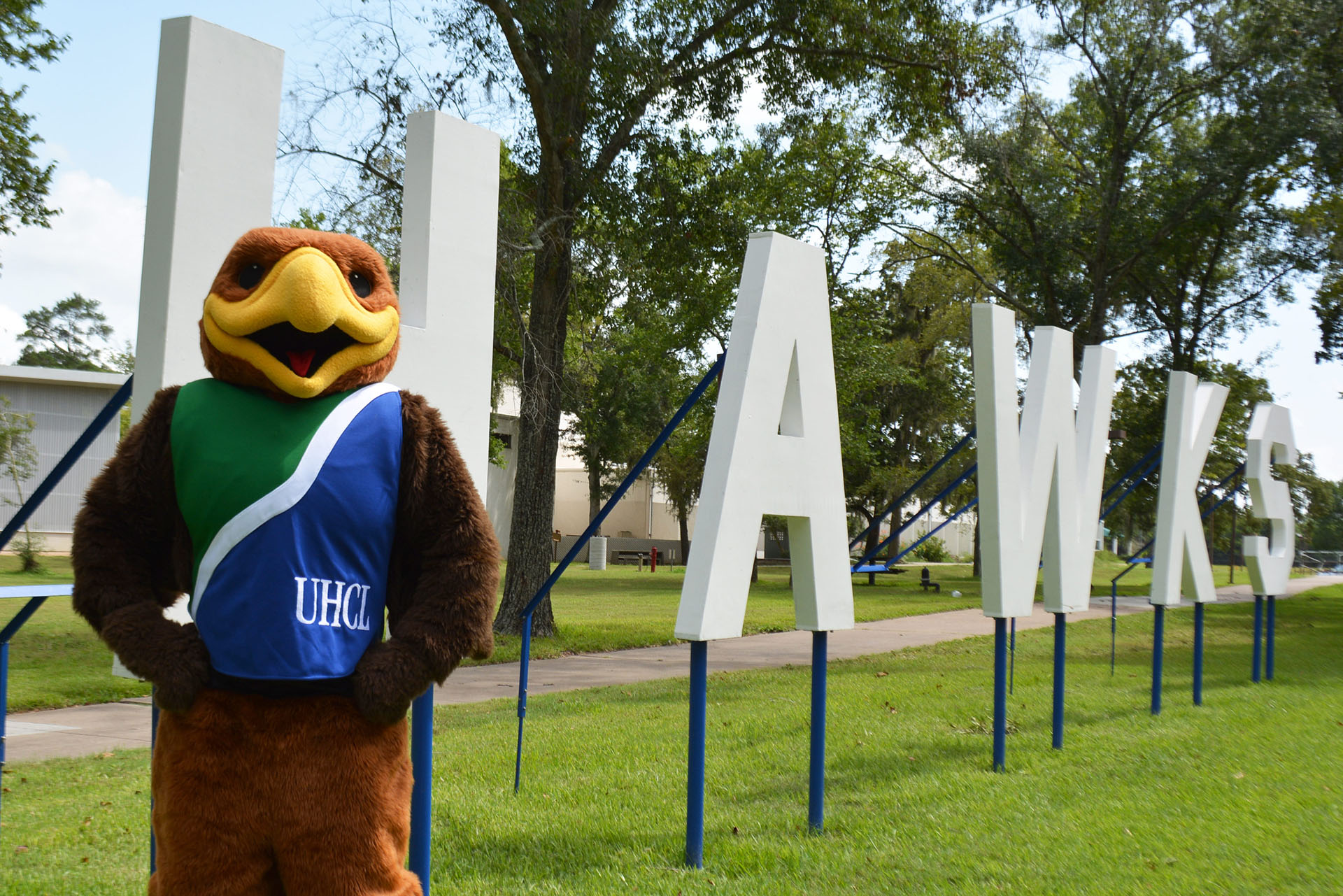 UHCL's Mascot Program exists to foster campus pride and spirit. It consists of two main areas, Hunter the Hawk and their Flight Crew.

Want to get involved? We are recruiting for our new Hunter for 2022-2023. If interested, please email hunterthehawk@uhcl.edu.

Learn more about the Mascot Program at UHCL GetInvolved.

If you would like to have Hunter the Hawk present at one of your events or meetings, please complete the request form below. We will do our best to accommodate your request, but cannot guarantee their availability.

Enthusiasm surrounding the Mascot Program has encouraged an initiative to take flight with the university's annual fund program, which gives university family members the chance to support the university through financial contributions. And, it only makes sense that those who attend classes or work at the university feel a natural affinity to the nature surrounding UHCL, not to mention a six-foot-tall hawk. Everyone feels a sense of ownership of the university environment, and apparently, of the mascot, too. Go Hawks!

For inquiries and requests about the mascot, contact HuntertheHawk@uhcl.edu.

Hunter the Hawk's history dates back to the '80s, when discussions of a mascot first began. These discussions eventually led to a mascot selection contest in the '90s. After decades in the making, UHCL proudly introduced this symbol as the face of the university in 2013.

During the 1980s, UHCL boasted an active intramural sports program. Players and fans brought up the subject of a mascot, and Alumni Association leaders advocated naming the red-shouldered hawk as the official mascot. However, no consensus was reached, and UHCL closed the decade without a mascot.

In the spring of 1990, the university held a contest to identify an official mascot, offering a prize of $500. The only qualification was that the mascot could not be a caged animal. By September, 10 semi-finalists emerged from the original 168 entries: Voyagers, Hurricanes, Comets, Lasers, Challengers, Clippers, Lakers, Waves, Explorers, and Platypus. Students, faculty and staff were invited to choose one of the semi-finalists and submit a contest entry based on the name, including a drawing or pictorial representation, slogan, rationale, and ideas for mascot use.

In October of 1990, UHCL Executive Council narrowed the finalists to five, and Scott Martin's "Hurricanes" design was selected as the official mascot. University officials expected the design to appear on all mascot paraphernalia and souvenirs, including T-shirts, representing the UHCL intercollegiate sports and recreation teams. However, implementation of the new mascot was derailed as the university community focused its attention on the search for a new president after the resignation of Dr. Thomas Stauffer in the spring of 1991. Furthermore, the Texas State Legislature, facing a budget crisis, cut higher education funding, which led to the closing of the DAB and the Recreation and Sports Department.

By fall 1992, the Hurricanes mascot had faded into obscurity.

In summer 1999, students planning the second annual Welcome Back to School Bash created an icon out of the blue and green UHCL logo to promote their planning efforts. The design they sketched became known as “Blockie.” A trademarked symbol of the university, Blockie was used by Student Involvement and Leadership to promote a range of activities and events. In addition to Blockie, the egret was often mistakenly recognized as the official university mascot. Calls for an official UHCL mascot periodically occurred across campus, as seen in the UHCLidian – now The Signal - in 2001, 2007, 2008 and 2010.