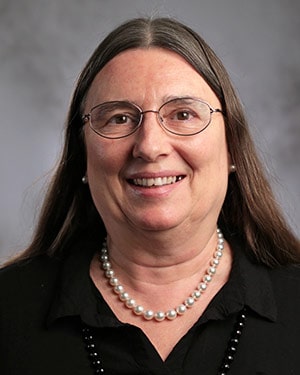 Associate Professor of Physical Chemistry,
College of Science and Engineering

Alexandra MacDermott received her doctorate from Oxford University in Physical Chemistry. Her work is aimed at elucidating the origin of enantiometric bias in nature. To that end a large part of her efforts are currently directed towards ab initio calculations of molecular parity violating effects. She is also pursing research aimed at using chirality as the signature of life in the universe.

A.J. MacDermott "Stephen Mason Review: The Ascent of Parity-Violation: Exochirality in the Solar System and Beyond", Enantiomer (2000) 5 153-168

Dr MacDermott's research interests lie in the broad area of *chirality*, encompassing not only the theoretical calculation of parity-violating and other enantioselective effects and chiroptical properties, but also chirality as a *signature* of life, in particular the chiroptical detection of life on other planets: although herself primarily a theoretician, she leads an international group, the SETH Consortium, which is currently developing space polarimeters in Moscow to Search for Extra-Terrestrial Homochirality (SETH) on Mars.

She is a Co-Investigator on the COSAC experiment of the Rosetta mission to Comet Wirtanen, and an Adjunct Scientist on the Beagle 2 Mars Lander. Her current work is the ab initio calculation of molecular parity-violating effects (in particular the *parity-violating energy difference* or *PVED* between enantiomers, and also enantioselective beta-radiolysis) which may play a role in explaining the *origin* of chirality - i.e. *why* life is based on L-amino acids and not their D mirror images.