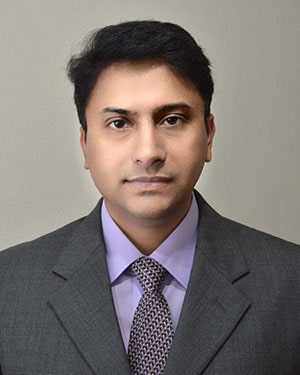 Assistant Professor of Computer Science,
College of Science and Engineering

Dr. Khondker has worked as a Research Assistant at MSCI Inc., Oklahoma, on site. He was associated with the multi-core CPU performance prediction modeling in distributed environment group. He was in-charge of introducing mathematical models, associated parallel algorithms, and simulators for the research project. The work was highly appreciated by the research community and resulted in several high-ranked journal and conference publications. Dr. Khondker has also worked in the Samson high-performance research lab in the University of Oklahoma where he utilized his proposed performance prediction models to introduce task dispatchers in distributed multi-core environment. Both task dispatchers were compared against widely used commercial system with real-world heterogeneous benchmark workload (SPEC 2006). Empirical results showed the accuracy of introduced task models which outperformed the commercial task dispatcher.

Dr. Khondker is the recipient of distinguished alumni award 2017 based on his academic achievement and service towards the community from North South University. Recently he received two internal research grants from the UHCL. Dr. Khondker is the recipient of Robberson Research and Travel Grants in 2014 and the recipient of the Computer Science Advisory Board Scholarship 2012–2013. His research interest includes parallel and distributed systems, performance modelling algorithms, and real-time scheduling. Based on his research interest and expertise, several undergraduate and master's students are working with him on their final thesis/project. Dr. Khondker has published several Journal and conference papers in highly reputed peer-reviewed conferences and Journals. Besides, Dr. Khondker is working as a reviewer for multiple journals and conferences. He is also the member of Schlumberger Eureka Technical Community (SETC) and International Association of Engineers (IAENG)

Dr. Khondker has extensive hands-on experience on the following areas:

Dr. Khondker has extensive experience and interest working on the following research areas: