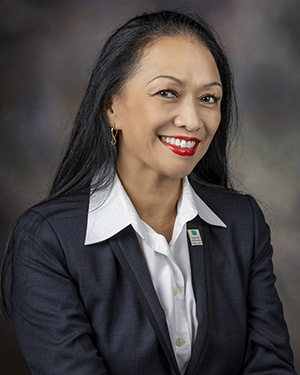 Gigi Do has served as the associate vice president of Global Learning and Strategy and Senior International Officer at University of Houston-Clear Lake since 2019. She oversees international partnerships, education abroad, scholar services, international student services, and the UHCL Diplomacy Institute, which she founded on July 29, 2020.

At the age of 8, she came to the United States from Vietnam and has called Houston home since the early '90s. Dr. Do has over 25 years of work experience in international education. Her contributions to the international higher education community have been featured in the New York Times, the Chronicle of Higher Education, the Houston Chronicle, and on National Public Radio. Additionally, she has accumulated numerous awards for her innovative efforts in international higher education including the Andrew Heiskell of the Institute of International Education (IIE) and Bellwether Awards.

Prior to arriving at UHCL, Dr. Do was executive director for the Office of International Programs at the University of Texas at San Antonio and the executive director of the Office of International Initiatives for Houston Community College (HCC). During her tenure at HCC, she played an instrumental role in establishing the first American-styled community colleges in Vietnam and the State of Qatar which had its first graduating class in 2012. She led the first American community college delegation to Saudi Arabia in 2008 to support Riyadh Community College in obtaining their first National Commission for Academic Accreditation and Assessment (NCAAA) certification.

As the associate vice president of Global Learning and Strategy, Dr. Do has revitalized global outreach at UHCL and maintains the importance of diversity, equity, and inclusion by demonstrating a commitment to students in providing inclusivity through her team of diverse ethnic and cultural backgrounds, creating international education access for all students, and ensuring that our campus will have safe spaces for conversations about racial, economic, and social inequities.

From June 2021 through December 2021, DI forged partnerships with a diverse range of community organizations, held distribution events throughout the greater Houston area, and distributed over 6,000 boxes of food. In celebration of the 2021 Qatar-USA Year of Culture, Diplomacy Institute was awarded tickets, memorabilia, and transportation to the CONCACAF Gold Cup games in Houston and Austin which were distributed to UHCL students and the Houston community. Additionally, DI collaborated with Public Art of the University of Houston System to be the recipient of a mural entitled, Cultural Bonds, painted by Qatari artist Muna Al-Bader.

Educational exchange partnerships have been created and revived with a host of countries including Spain, Japan, and Qatar. UHCL was the recipient of the Increase and Diversify Education Abroad for U.S. Students (IDEAS) Grant from the  U.S. Department of State's Capacity Building Program for U.S. Study Abroad. The IDEAS grant enabled three faculty and eleven UHCL students to travel abroad to study food security in Oman in January 2022.