The main purpose of the Center For Robotics Software is to leverage the technical infrastructure that exists between NASA, academia, and industry to identify and solve challenging robotics problems. Dr. Thomas L. Harman is the director and Carol Fairchild is the co-director.

Dr. Thomas L. Harman is the chair of the Engineering Department at the University of Houston Clear Lake (UHCL). Dr. Harman began his full-time career at UHCL in 1979. Before that he was a staff engineer in the Controls System Department of Lockheed Engineering. His Ph.D. was granted by Rice University in Electrical Engineering.

He is the Director of the Center for Robotics Software recently formed at UHCL. The center’s purpose is to involve NASA, industry, and other universities in robotics education and research.

His research interests are control systems and applications of robotics and microprocessors. Several of his research papers with colleagues involved robot and laser applications to medicine. In 2005 and again in 2016-7, he was selected as the UHCL Distinguished Professor. He has been a judge and a safety advisor in the FIRST robotic contests in Houston.

Dr. Harman has authored or co-authored 18 books on subjects including microprocessors, MATLAB and Simulink applications, and the National Electrical Code. He has authored or coauthored 60 conference or journal publications.
With the co-director of the Center for Robotics Software, Carol Fairchild, he has co-authored a book on robotics ROS Robotics by Example published in July 2016. He and Carol have updated the book for the latest version of the ROS software (Kinetic) with an expected publication date of February 2018.

His laboratory at UHCL has a Baxter two-armed robot and several mobile TurtleBots, flying drones, and other robots. UHCL students have participated in several robotic contents including the NASA Swarmathon held at KSC.

Carol Fairchild is the Co-Director of the Center for Robotics Software and an inaugural researcher in Baxter’s Lab at UHCL. Her research involves the use of Baxter for expanded applications and she has numerous projects with the mobile and aerial robots in the lab. She is also a member of the adjunct faculty, teaching a robotics elective and various computer engineering labs.

Ms. Fairchild is also owner and principal engineer of Fairchild Robotics, a robotics development and integration company. She has been involved in many aspects of robotics from her earliest days of building her first robot, a Heathkit Hero. She is an alum of UHCL with an MS in computer engineering and a BS in engineering technology from Texas A&M.

She and Dr. Harman have co-written a book, ROS Robotics by Example and are currently working on an updated edition to reflect the latest software version of ROS, Kinetic.

Ms. Fairchild is also actively involved in implementing STEM curriculum and expanding a robotics program at a K-8 private school in southwest Houston. She has taught middle-school robotics, coached FLL, and volunteered for FIRST Robotics.

He has taught graduate level courses in Robotics and Digital Control Systems and supervised graduate students in their thesis research at UHCL. He also taught Robotics and Digital Control Systems courses at Lockheed Martin/Houston. Dr. Nguyen has worked over the years with Dr. Harman on various robotics projects.
His recent work includes developing a dynamic simulation for the NASA R2 Robonaut space robot at Johnson Space Center, Houston.

Visiting Robotics Researcher in the Department of Engineering, Center for Robotic Software at UHCL. Areas of interest include artificial intelligence, humanoid robots, ROS communications, and mobile robots. Liz is working on her Master’s degree in Engineering at UHCL. She has a Msater’s degree from UH in Electrical and Electronics Engineering. In addition, Liz studies Music at Berklee College of Music.

As a visiting researcher, Michael will conduct research on "Baxter research robot and Applications" with Dr. Thomas Harman in the Robotics and Control Systems Laboratory in Delta 125 (Baxter’s Lab). Michael completed his MS degree at UHCL in Computer Engineering. Michael has programmed Baxter perform tasks using the Robot Operating System’s State Machine. He is also a magician!

Master of Science - MS, Computer Engineering, 2017 – 2019. Nabil will be working with Dr. Nguyen on a project to control Baxter the robot with a sophisticated joystick with 6 degrees-of-freedom.

Representatives from NASA and aerospace contracting companies gathered in early June at a kickoff event for the new UHCL Center for Robotics Software. The center, led by Thomas Harman, Ph.D., professor of computer engineering, will focus on solving problems and creating solutions for using the Robot Operating System, or ROS. The center will also offer workshops and seminars to interested individuals or organizations and provide UHCL students with opportunities for internships and future employment. 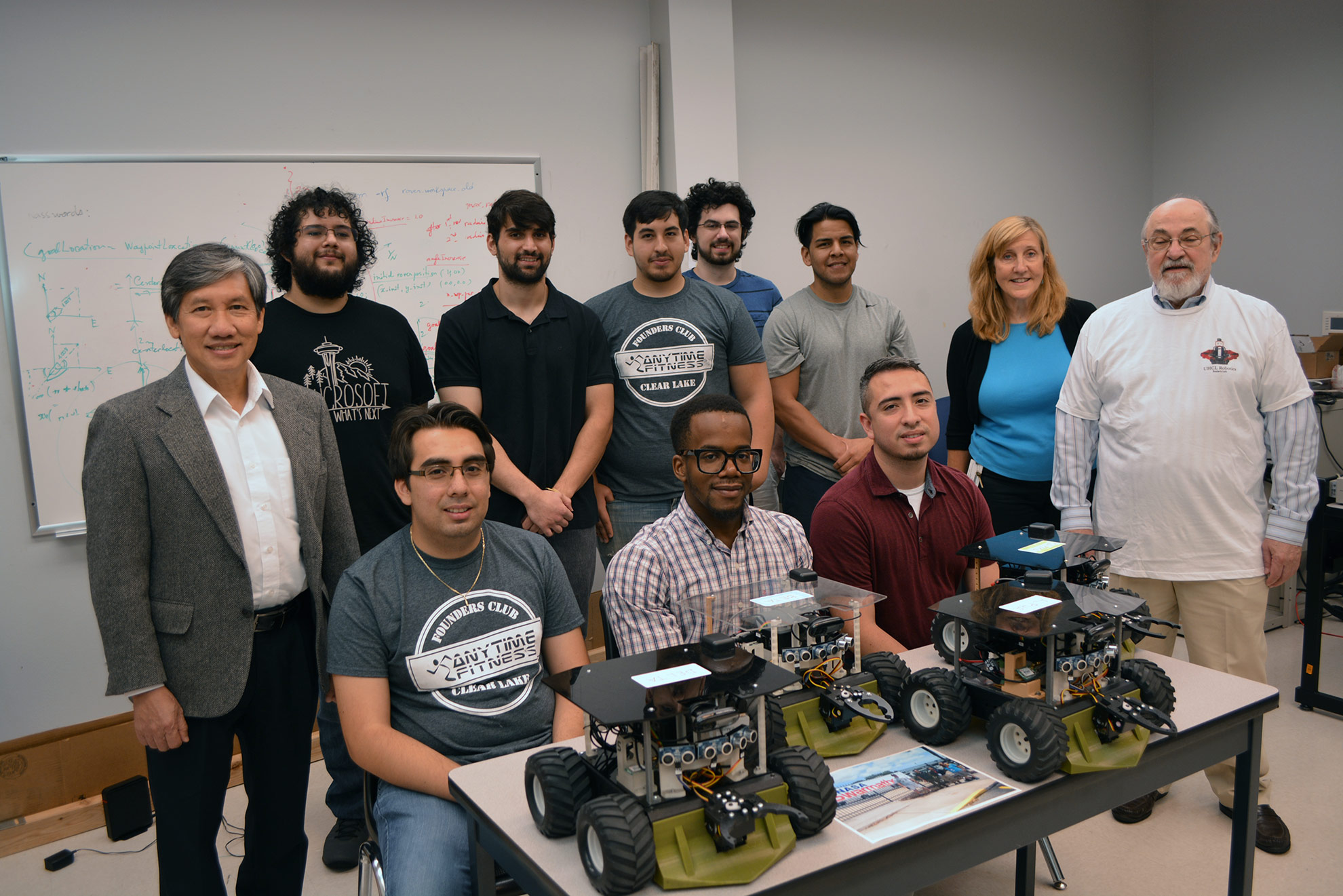 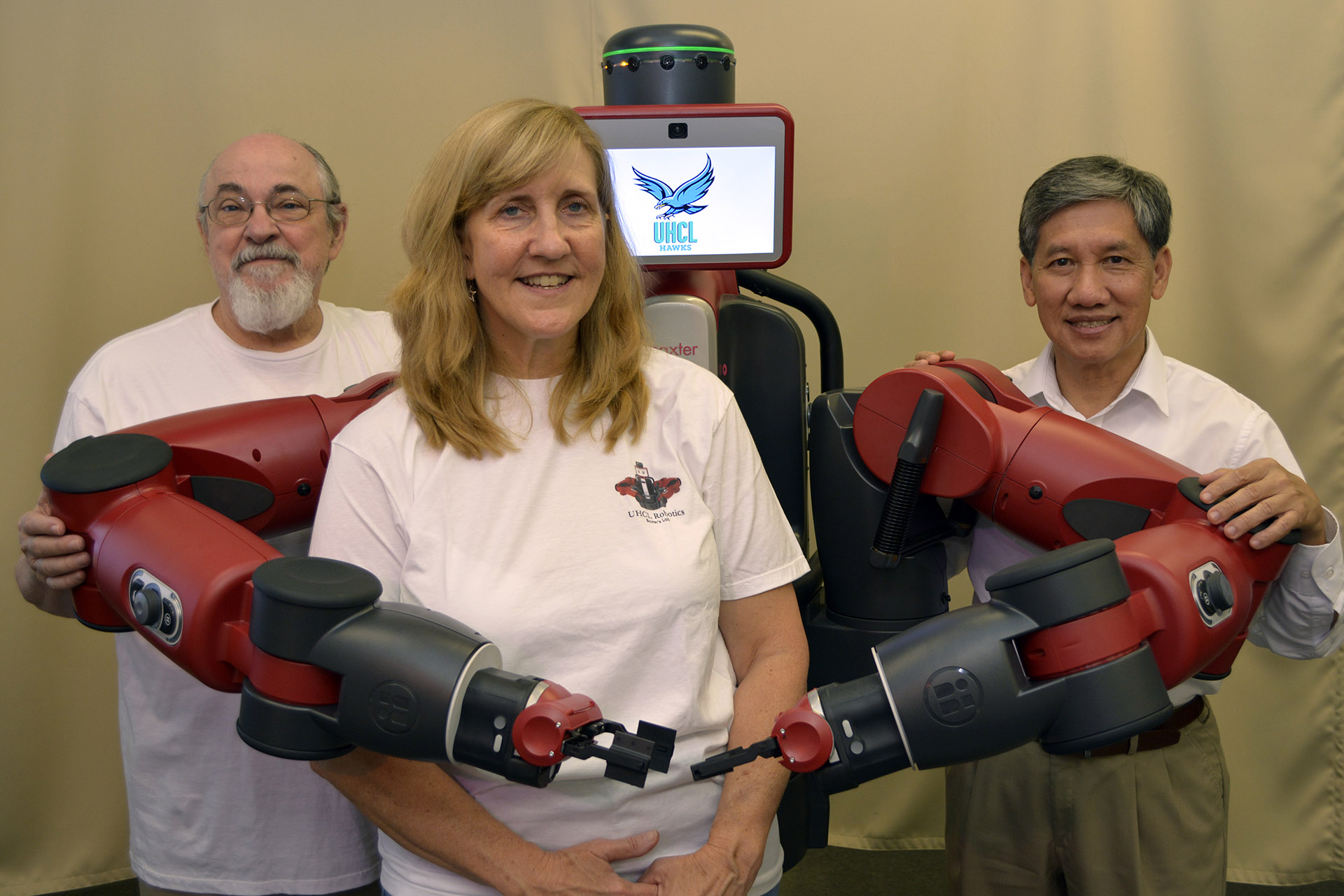 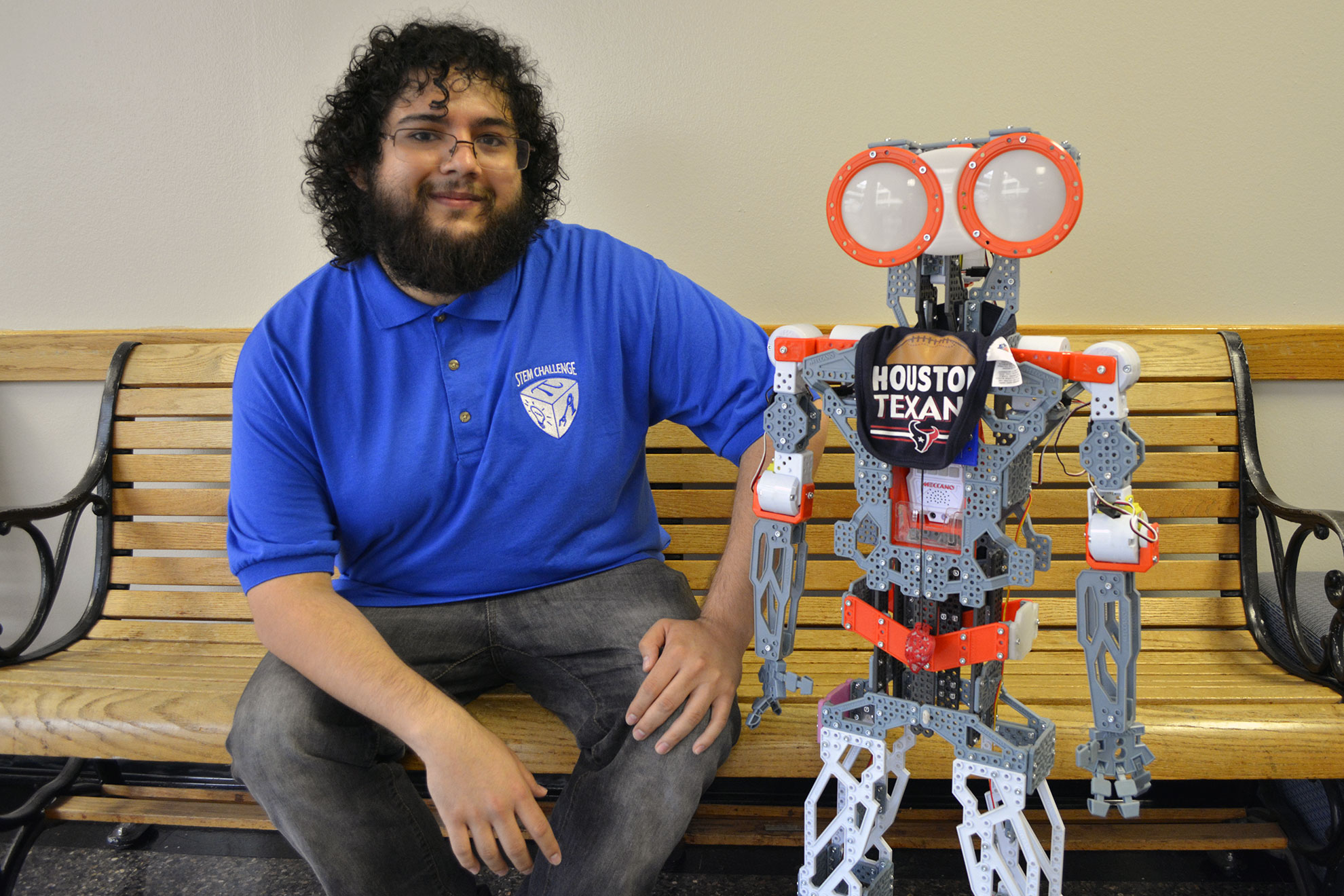 July 21, 2017
Area educators, engineers and students gathered at University of Houston-Clear Lake for the Houston Robotics and AI Day on Friday, July 21 for presentations and demonstrations of the latest research and applications of robotics and artificial-intelligence technology. Read More

Robotics and AI Day provides a showcase of what is, what can be

August 14, 2017
Three wide-eyed middle-school students stood over Turtlebot 3 “Burger,” one of the latest robots procured by University of Houston-Clear Lake’s Center for Robotics Software. Under eight inches tall, it doesn’t look much like a robot. It doesn’t look anything at all like a turtle, let alone a hamburger. Read More